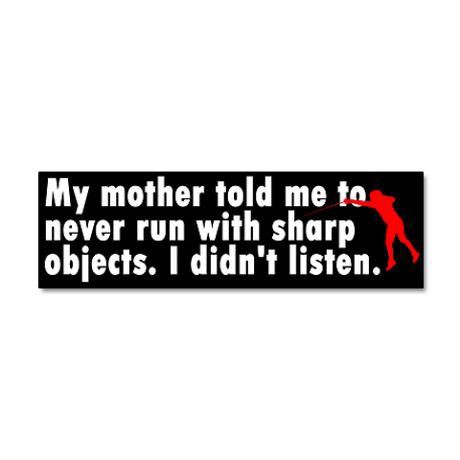 If you’re reading this, you’ve stumbled – intentionally or otherwise – upon my latest writing project.  I’ve run a number of blogs in the past, but this is a dramatically new direction for me. If you hadn’t noticed yet, this blog is meant to provide a place for me to process and share my thoughts and experiences as I journey through training parkour and historical rapier combat.  Yeah. I know that’s an odd combination. But that’s my life. I like sharp, pointy things and climbing on stuff. When I’m not climbing buildings, or stabbing my friends, I’m also real fond of cross stitch, video games, and reading. I’ve been practicing late Medieval rapier combat (as interpreted by the Society for Creative Anachronism) for roughly five years, and parkour for a little over a year and a half.

I came to both of these activities relatively late, age-wise (particularly where parkour is concerned), without the benefit of having ever really trained an organized sport before, and with precious little in the way of physical conditioning.  I wasn’t a gluttonous puddle, but neither was I what I, personally, would call ‘fit’. I was functional, but pretty squishy and fairly easily winded. I should add, though, that I >did< train karate as a kid for a little while, and also dabbled in gymnastics and figure skating, but all of those were so long ago, and so short-lived that I’ve never felt they’ve helped me in any way now, as an adult.  I never did any of those things long enough to learn what it actually means to really *train* something. I never learned how to make athletics a process, how to build the appropriate headspaces, how to conquer plateaus, manage competition, train with others without feeling self-conscious, or how to not get in my own way with harsh self-judgement and unrealistic expectations.

I often do very poorly in rapier tournaments because I struggle to get and keep my head ‘in the game’, as it were, and have been on a hiatus from it because I got stuck on a plateau for so long that I began to burn out and wasn’t having fun anymore.  Where parkour is concerned, I really struggle with feeling inadequate. I often have to really push myself to go out and join jams, because I’m afraid of being an embarrassment to everyone else there. Even training in a gym – the gym I’ve been training at this entire time – where I know most of the other regulars – can feel daunting sometimes.  But then, even I have to acknowledge that the cards were stacked against me a bit in both places. I was woefully unprepared for the steep physical demands of parkour, or for the complex mental challenges of fencing, and yet I routinely train with people who have come to these sports with pre-existing athletic backgrounds, and/or who’ve already achieved high levels of skill.  For me, that’s a lot like starting a race 10 miles behind the starting line and then pushing like hell to catch up to everyone else, because that seems to be where the bar is. (I’m not a runner, by the way. I really hate level-ground distance running. It’s boring and unpleasant. :-p) So, these are some of the biggest challenges I face. These are the things I’m working hardest to overcome, and my hope is that this blog will help me do that, by serving as a kind of public record and journal.  Expressing my thoughts and experiences usually helps me process them, and I like the idea that maybe some of what I write will be useful, inspiring, or encouraging for others. I know I’m not the only one out there who’s chosen ambitious pastimes.

Just the other day, someone asked me why I’ve continued to train (in this case) parkour, even though it’s been, and continues to be so, SO hard.  That’s a really good question, and the answers are a little different for rapier and for parkour. For fencing, the thing that’s most driven me to continue is the graceful precision, grounding discipline, and balance of it.  I’m madly in love with the fact that the rapier is both dangerous, and beautiful. I’ve felt drawn to swordsmanship since I was very young. I don’t know why. The martial aspect has also helped to give me a sense of empowerment.  Granted, no one ever walks around carrying a rapier through the streets anymore, but that sense of empowerment is nonetheless really important, because it’s opened me up to the idea that I might actually be capable of standing my ground if necessary and defending myself, and might make it at least a little easier for me to keep my head, should I ever be faced with that sort of situation.  That’s a profoundly important thing for me and also ties into the impact parkour has had on my life. Let me get very real for a moment and explain a little about why this is important.

From the moment I was born, to the moment I got on a plane and moved out of the country at 18, to well into my college years, and to a degree, even beyond, I lived under a shadow of very real danger and fear.  Something about my bearing, physical appearance, behavior, or mere existence on this planet seemed to repeatedly peg me as a target for actually criminal bullshit. One of my earliest memories is of being literally abandoned at the side of a rural road in the dark, and then receiving hate from my own mother because I had failed to die.  And that’s not even the worst of it. I went on to grow up in an environment that conditioned me to be hyper-vigilant, skittish, passive, and acquiescing. If I failed to sense the danger coming and get out of its way, it was safer for me to withdraw into myself and let whatever was on tap for that day simply happen. Every day was a game of Russian roulette.  Year after year. So I learned to ‘live’ and move beneath the fear and simply survive. But none of you are here to read about things like that. I bring it up only to provide what I feel is important context. To give you an idea of where I’m coming from as I explore these two practices, and why they’re important to me.

Until about a year and a half ago, I had literally never known what it felt like to not be chained by fear.  Paradoxically, I actually really need adventure, but am also perpetually terrified and mistrustful of just about everything.  Honestly. I’ve stubbornly pushed out many times, but have often been physically ill with anxiety as a result.  I’ve always just struggled through that and done what I could anyway. My fear owned me and dragged me back every single time, like a tether.  No matter how hard I tried to break free. But then a video game, of all things, introduced me to the concept of parkour, and I got this wild, literally crazy idea that this was something I wanted to try.  I did not expect it to stick. I believed it was simply the latest in my menagerie of weird flings, and that I’d soon enough wake to reality and burn the infatuation out of my system.

I did wake to reality.  That much is true. After just one ‘boot camp’ foundations class, I genuinely didn’t know if I had it in me to make it through the rest of the month my partner and I had paid for.  I had literally never done anything so physically taxing in my entire life, and the days that followed opened my eyes to a world of muscle pain that had, up to then, been completely unknown to me.  Sitting down in a chair made me break a sweat. I didn’t know how to handle that, or what to do about it. But we’ve already established that I’m nothing if not stubborn, so I promised myself to at least complete this one month – just the one.  It gradually got less awful, and about halfway through, something remarkable and entirely unexpected happened. The coach challenged us to do something that I really, truly, did not think I could do. He asked us to make a small leap from a 4ft box, grab hold of the top of an 8ft wall (cat leap), hold ourselves there for a moment, and then get down.  I literally shook. I stood on top of that box for probably a solid 20 minutes and visibly trembled. But the coach was patient and stood by me until I was actually able to literally step forward, over my fear, and into space. It wasn’t until I was on the floor again and walking away that I realized what I had done and I swear I physically felt that chain drop.  I suddenly realized that everything I’d ever believed about my limitations was wrong and, more importantly, I had finally shattered the power fear had over me. It was so completely revolutionary that it totally blew my mind and put my entire personal perspective on tilt.

Now, go back to the paragraph above about how strangling fear and feelings of powerlessness have been in my life and consider what that kind of epiphany is like for someone who never really had a chance to develop a healthy sense of self-agency when they should have.  Consider what it means to look in the mirror and see that you are finally becoming truly strong, both inside and out, when the only other self-image you’ve known was built on other people’s determination to either dominate and take advantage of you, or label you as shy, weak, frail, and ‘waif-like’ because you’re reserved and happen to be small and naturally thin.

I still walk with fear and anxiety every day, but parkour is legitimately helping me learn to manage it.  I carry the personal victories and lessons I gain while training forward into the rest of my life, which has made parkour less of a hobby, and more of a lifestyle.  I’m fitter and stronger now than I have ever been in my entire life, and have been finding the courage to do a great many things I couldn’t do before. And that, in turn, has been slowly, but surely helping me pull myself together again after a terrible rock-bottom crash.   At the end of the day, fear is fear. Whether you’re standing on a ledge, preparing to make a difficult jump, or standing in a doorway, preparing to confront a toxic individual.

So, there we are.  That’s most of the important background behind me and my love for parkour and sword fighting.  I hope you enjoy the posts you find here! Thanks for reading!